Businesses For Health (B4H: TB) has been established to assist private sector businesses to deal with the problems associated with the current TB epidemic in PNG. It is their mission to ensure every workplace can respond immediately to every case of active TB which will result in healthier and more productive workforces and improved awareness throughout the wider community.

Unlike HIV, Tuberculosis is an easily transmitted airborne infection. Unlike HIV, the workplace is a likely site for the transmission of TB and improvements in testing and treatment of HIV infections has reduced the rate of death due to AIDS in many parts of the world. While many efforts are being made to reduce TB/HIV deaths in PNG, issues such as poverty, population growth, health system weaknesses, and treatment resistance have resulted in a triple threat TB epidemic in PNG, which has been described as a national emergency. In PNG, the rates of HIV/TB co-infection, drug-susceptible and now drug-resistant forms of TB are amongst the worst in the world.

The World Health Organisation (WHO) estimates that an employee with TB can lose an average of 3 to 4 months of work and income, resulting in potential losses of 20 to 30 percent in annual household income. Over 6,000 people contract TB each year which one-quarter of all cases in the country is and has taken a serious toll on businesses in the NCD. 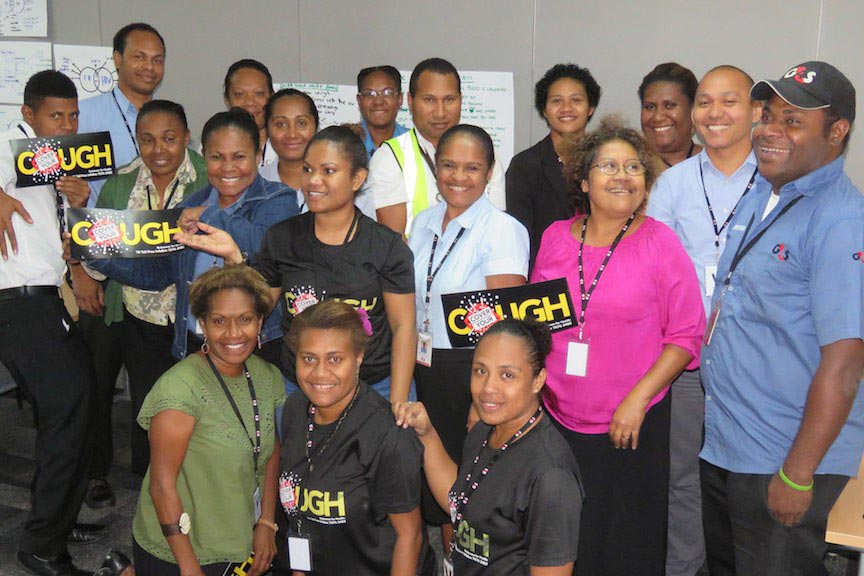 Sir Brian Bell Foundation has assisted with a sponsorship of K50,000 yearly for the Brian Bell Group to train 15 ‘TB Wardens’, who will promote awareness of Tuberculosis in the workplace.

The Sir Brian Bell Foundation has committed to improving the health of Brian Bell Group team members and has assisted with a sponsorship of K50,000 yearly across BBG to train 15 “TB wardens” in the workplace who can run activities and are able to rapidly respond to employees with symptoms of concern. The Brian Bell Group now have 6 fully trained TB wardens based in Port Moresby and Lae who are familiar with:

All TB wardens after their training were tasked to develop and suggest improvements to the Company’s Policy on managing TB at the workplace. Each has made great contributions and suggestions to developing and refining BBG’s TB Sick Leave Agreement’ which will be incorporated into the 2019 Company policies on managing sick leave.

Brian Bell Group Human Resources Manager Philomena Nawara said “This is indeed a significant milestone and we are grateful for the support from The Foundation and B4H in partnering with us to manage TB at the workplace. We look forward to including other BBG locations in the TB warden’s training as soon as B4H extends its training programs to other parts of the country”.